The sexualisation of girls for profit [UPDATED]

Instagram hosts countless pages filled with sexualised images of kids, many under the guise of 'child models' promoting dancewear and swimwear. There are girls standing, hip to the side, pulling on bikini bottoms. Others are posed with arched backs and spread legs. Backsides to camera, arms overhead. Girls look wistfully back at the camera, lips parted. Side-shots capture girls with backsides pushed out.

Kids don't naturally strike these poses. Adults put them up to it. And we know how these poses keep women and girls in their place, for example, by portraying them as submissive or positioned for sex.

In 2016 Collective Shout ran a series of posts and a campaign against a dancewear company (and stockists) that in our opinion posed and styled girls for male paedophiliac fantasies. The company's pages had become a magnet for paedophiles, until we exposed this. Unfortunately, the practice continues.

Posts of young girls in bikinis are hashtagged #girl, #young, #beautifulteen, #teenager, #teengirl, #teenmodel, #teenbody, #bedroom. They attract a lot of attention, predominantly from accounts that look like they're owned by men. It appears that many men like to look at, like and comment on young girls and teens in bikinis.

In one post, a US-based school-aged model straddles an arcade motorbike. It's captioned, 'Lets take a ride.' In another shot, she stands by a drinks fridge. Male-named followers make comments like "Goddam you're so f***ing gorgeous" and "absolutely sexy." 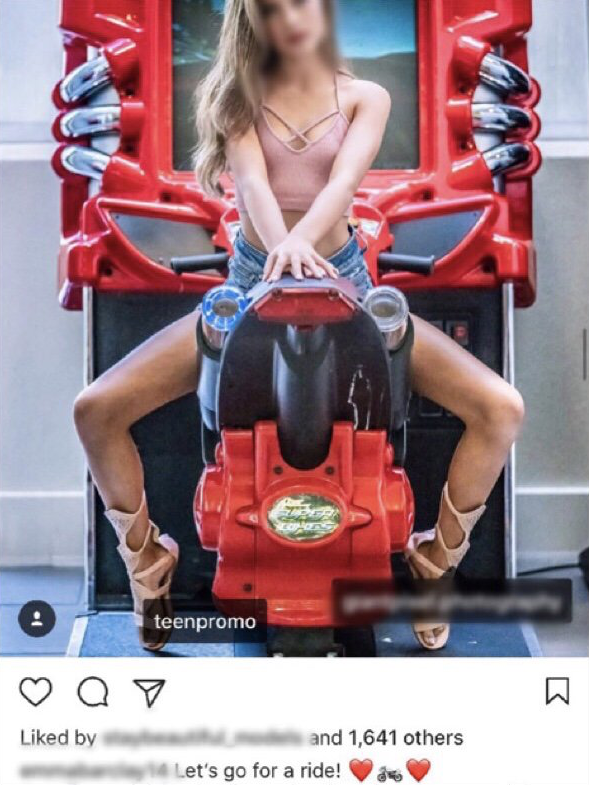 Other Instagram page owners ask permission to use child models’ photos. One asks an 11-year-old girl, “may we share yours on our page?” Their page is filled with underage models. It’s a gallery catering to the fantasy and fetish of men. Some models assure followers they’re 18. But we can’t be sure. Girls model bikinis in adult poses. “Wow sexy af”, says one follower.

A 13-year-old girl from Hungary models swimwear. One image is captioned "Heat", with a fire emoji. A man comments, “Yes you are in heat”. . “You have the sexiest little body baby girl”. “Wow hot sexy”.

To male followers, the girls are sex objects. They comment on asses and legs, size and shape, tightness. Milky, white skin. “Chica sexsi”. “Magnifique”. “Deliziosa”. Comments come from around the world. “I just want a taste”. “Sweet ass babe”. “I want to kiss your ass”. “Tight sexy body”. “Would you like to bounce on my lap? Talk about what pops up?”

A 12-year-old US-based swimwear model is propositioned by a man “looking for baby to spoil”. Hashtags #sugarbabygirl #daddysgirl.

I click on a follower’s page. It’s public, a man who says he’s from Poland. He has 17 posts. Most are of little girls in dancewear or bikinis. One looks about 4. He’s used screengrabs and reposts. We know images are easily captured for use in paedophile forums. Cyber Safety expert, Susan McLean, recently reminded us of this after a woman found her son's photos on an Instagram page filled with images of semi-clad children. The E-Safety Office has previously warned of how even “innocent family photos” become fodder for online predators.

I report some pages and comments. Instagram reports back that no community guidelines have been breached. In the world of Instagram fetish, apparently, children are fair game. I report them to the Australia E-Safety Office. The activity does not appear to be illegal, so the content will not be investigated.

Another page hosts a photo of a young girl, no more than 10 years old. She’s leaning back against a surfboard, wearing a white, string bikini. No name. “Who is she?” one man asks. “Sexy”. “Wonderful sexy”.

I stumble across yet another page devoted to prepubescent bikini models. One girl is posing on the beach. She’s leaning back on her hands, legs stretched out in front of her, backside lifted up out of the water. It looks cold and uncomfortable. The men like it. “Sexy”. “Sexy girl”.

When it comes to child and teen bikini modelling, a Brazilian swimwear brand brings in the big-shots. One is a 13-year-old US-based swimwear model. At the time of writing, she had 311k Instagram followers on her main account, and another 32k on a backup account.

I watch one of her video posts filmed on the beach. There are front shots, shots from behind. It’s windy.

These are just a couple of comments from the men who follow child swimwear models.

In another video post, she eats potato chips. Predatory comments are rampant:

“Do popsicles next please”.

She's in the pool. The video switches to slo-mo as she flicks her hair back.

Her Instagram accounts promote subscriptions to her Patreon page. Patreon is a US-based membership platform where “artists” like pseudo-child-exploitation-content creator Belle Delphine provide content in exchange for paid subscriptions. For 5, 15 or 25 dollars per month patrons can access the child’s exclusive material: pics, videos, birthday shout outs and personal replies to comments. Patreon reviews for the page appear to be almost entirely from males. They all seem happy with what they get as T25 subscribers. One warns not to become a T25 patron: it’s too much of her to handle.

At once, my email inbox is filled with Patreon messages:

“What swimsuit do you want me to wear for the LIVE?” Top-tier patrons can vote on which bikini she wears for the dog wash. There’s a choice of brands. The other patrons don’t seem interested in brands. They’re clearly not here for the advertisements. “How do we choose anyway?” they ask. She looks good in all of them.

I scroll through the posts. In one, patrons share personal information. Every comment looks to be from a man. There’s much talk of work. One’s a flight attendant, others are photographers. There’s a party store owner, a truck driver, a software engineer, an army veteran. One’s employed at a primary school, another at a middle school. There’s a marine biology educator at an aquarium. One is hoping to go to law school.

One simply shares about his obsession with little girls’ belly buttons.

The patrons hail from various places in the US. From England and Aruba. Melbourne.

Mum runs the account. She refers to patrons as the ‘Patreon family’. I can’t help but wonder what sort of family this is. And who are all these men? Are they the child’s Patreon uncles? They are paying for exclusive bikini shots of a 13-year-old girl. For a child’s time. Her attention. Her replies. They comment on how good she looks in ‘that bikini’. They comment on her body parts. Some wish they were the dog that she’s washing tomorrow. In a latter post one man asks, could the girl possibly model some lingerie. They appear to be the very kind of men children are warned to stay away from - in real and virtual life. Yet here on Patreon, the behaviour - and the men - are the norm.

The live dog wash video is posted. Mum warns patrons not to use sexual innuendo in their comments. Presumably, that would breach Community Guidelines. Patrons are mostly in agreement. They must know that toeing the line will preserve their access to the child.

The vast number of men that treat the intentional viewing of young girls in bikinis as an innocent past time is disturbing. Some even put a noble, altruistic spin on the role of a patron. They’re contributing to her future. She’s going to be a star. They tell her so. Mum’s grateful for these comments and agrees. She has sights on Victoria’s Secret and Sports Illustrated for her daughter. The patrons are going to help get her there, $5, $15 or $25 at a time.

But nothing overrides the fact that these are men paying to ogle at a child in a bikini. There’s no such thing as altruistic pedophilia.

As a top-tier T25 subscriber the men and I will be able to watch a bikini-clad child wash her dog tomorrow in almost-real-time. I don’t want to watch her. I want her parents to get her out of there. She’s a child. She’s being adultified and showcased for the voyeuristic pleasure of men. It’s exploitation.

I won’t pay another subscription fee to Patreon. Not for this child bikini model. Not for anyone. With a 5% commission taken on each patron payment, Patreon has earned thousands of dollars from the sexploitation of this child.

Patreon’s Trust and Safety Team has since requested that certain images be removed from the page by September 6. In protest, and so as to not disappoint fans, Mum has closed the Patreon account and is launching her daughter’s own pay-to-view website. In the meantime, ex-patrons can keep up-to-date via Instagram.

There's a new Instagram post. ‘Likes’ and comments roll in. One follower wants to see the girl naked and asks for pics to be in-boxed. The comment is eventually removed, but it's a stark reminder that Instagram’s “sexy girls” – children in bikinis - are magnets for predatory men.

Note - While E-Safety advised that they would not be investigating the content I reported, they provided the following tips:

Over the past few months we have compiled hundreds of samples of predatory comments on underage girls' Instagram posts. See below for just a few examples of the rampant sexualisation, harassment and grooming of children that occurs on Instagram.

New data reveals that between July and September 2019 Instagram removed over 750,000 posts containing "child nudity and sexual exploitation". (Facebook removed 11.6 million pieces of similar content.) But as our samples show, the sexualisation and harassment of underage girls on Instagram is the norm. 750k posts is a drop in the ocean for a platform that has reportedly become the most used site for child predators.

Last week the New York Times put the spotlight on tech companies which are doing the bare minimum to stop the flow of child exploitation material, despite having the technological capacity to do more. We must continue to hold companies like Instagram accountable for the part they play in the sexploitation - and the normalisation of it - of children. Stay tuned for more.

A day of the girl on Instagram: posed, exposed and at risk

If Instagram can restrict diet products, they can stop child sexual exploitation