Wicked Campers has once again violated Advertising Standards with its latest slogan “fat girls are harder to kidnap.” The vehicle hire company is a repeat offender, well known for printing vile and degrading slogans on its vans.

The Ad Standards Board has upheld many complaints against this company, but as reported by Mumbrella, Wicked Campers no longer bother to respond to such rulings.

Why would they? There’s money to be made – sexist, pornified messages are apparently a big hit – and there are no penalties for violating advertising standards. According to Wicked Campers, even violating the law is worth it. Here’s Wicked Campers on Facebook, mocking Queensland Police and gloating about the cheap fines! 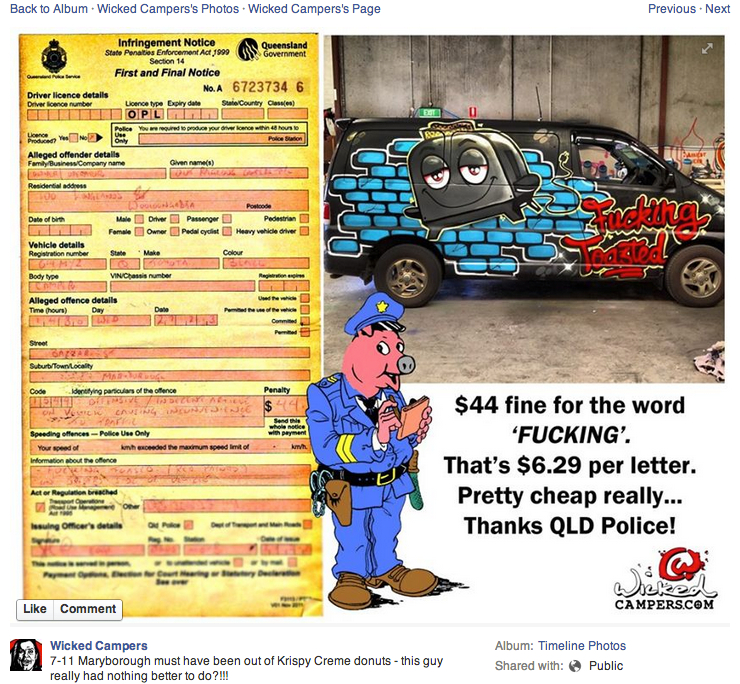 Here’s a sample of some of the other misogynist messages Wicked Campers broadcast in the public space.

The Qld Government recently held an inquiry to determine whether the current system of advertising industry self-regulation is sufficient to prevent sexualised, objectifying or otherwise inappropriate content being broadcast in the public space.

Collective Shout participated in the inquiry and argued that self-regulation does not work. Wicked Campers is just one example of a repeat offender continually defying the advertising industry code of ethics.

The Parliamentary Committee Report was released in January 2014 with a list of recommendations which if acted on, would stop companies like Wicked Campers in their tracks.

Recommendations include significant and ever increasing fines for repeat offenders and a requirement for recalcitrant advertisers to submit to pre-vetting of future ad campaigns. We are calling on the Attorney General, the Minister for communities and child safety and the Qld Premier to act on these recommendations and make them law.

Violence against women is no joke and Wicked Campers have gotten away with this behaviour for too long. Your voice will make a difference!

Your voice DOES make a difference! If you have any questions, let us know in comments below. If you leave a valid email address (we will not publish your email address online) we can respond to your enquiry via email.

PS. We just received news that the Ad Standards Board has upheld yet another complaint against Wicked Campers. Click here to check out the article on Mumbrella. Don’t let them get away with it. Make some noise – send those emails!