UltraTune opted to screen their ads during the Australian Open while families were watching the tennis. You can read about them in our earlier blog post here. 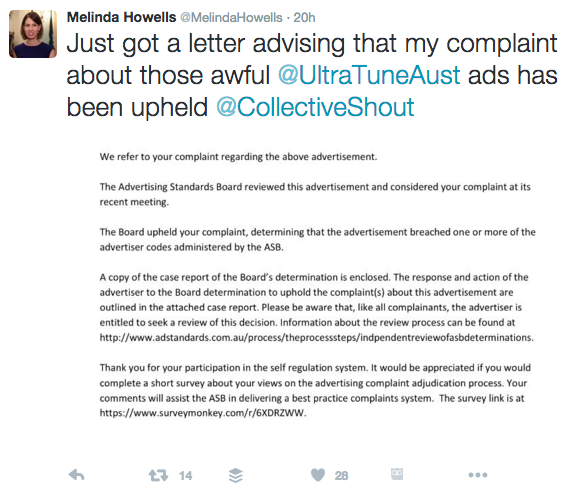 The Board noted that the intent of the advertisement is to depict two women unexpectedly breaking down – with the advertiser suggesting that regular services from Ultratune will prevent such an ‘unexpected situation.’ The Board accepted that the intent of the advertisement is to show an unrealistic situation. However the Board considered that the women are depicted as unintelligent in the way in which they sit passively, with blank faces, in the car on the train tracks and also in the way they appear to not notice the oncoming train. This behaviour, in the Board’s view, makes the women appear unintelligent and presents them in a stereotypical helpless female situation.

In the Board’s view, the depiction of the women’s reaction to their situation is a negative depiction of women and does amount to vilification of women. The Board considered that the advertisement did portray or depict material in a way which discriminates against or vilifies a person or section of the community on account of gender and determined that the advertisement did breach Section 2.1 of the Code.

UltraTune responded saying they "intend to seek an independent review of the Board’s decision" and "vigorously dispute these findings". UltraTune executive Chairman Sean Buckley still has the ad available on his YouTube channel at the time of writing.

UltraTune's refusal to comply with the ASB ruling raises some serious questions about the effectiveness of ad industry self-regulation. The ASB has no power to compel advertisers to abide by its rulings, nor are there any penalties for advertisers who refuse to do so. Companies who have failed to act in line with ASB rulings in the past include Aussie Boat Loans, Wicked Campervans and more recently sex shop Honey Birdette, who posted on their Facebook page "Nobody tells Honey Birdette to take down her signage!"

It is clear that industry self regulation is not working.