Lingerie retailer Bras'N'Things has been forced to discontinue a Playboy video ad due to its overtly explicit content.

While many associate Playboy simply with its branded items or magazine, Playboy Enterprises own various adult TV channels and websites, broadcasting brutal, hardcore pornography. Retailers that stock Playboy branded products are helping Playboy to produce and distribute content that objectifies and degrades women.

Consumers lodged complaints with the Advertising Standards Board after being exposed to the sexualised content which was playing on TV screens in the retailer’s front windows in full view of passers by including children.

As a matter of “respect” to shopping centres, the video would be replaced with pictures instead in an act of “good faith”.

The ASB stated the “manner in which the lingerie is modelled by the woman is sexualised”. “The silent, moving image draws the eye of passers-by” while “the model is stroking her hair and her moving her body suggestively and that this amounts to a sexualised impact”.

After reviewing the complaints and the retailer’s response the Board determined that the advertisement did breach Section 2.4 of the Code.

In a response to the Advertising Standards Board Bras’N’Things stated: “The Playboy branded lingerie campaign that the complaint refers to has now concluded. The campaign was live from July 18 – 31.”

Given that the determination by the board was discussed on August 10 it is clear to see how retailers are getting away with continually breaching advertising codes without consequence. 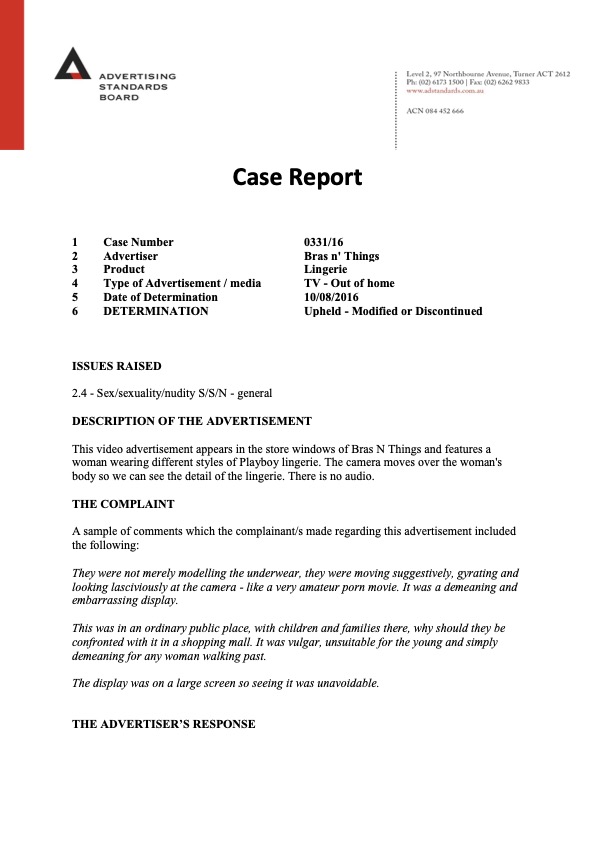 Read the article on news.com.au here.

Read more on the failures of the Advertising Standards Board system here.