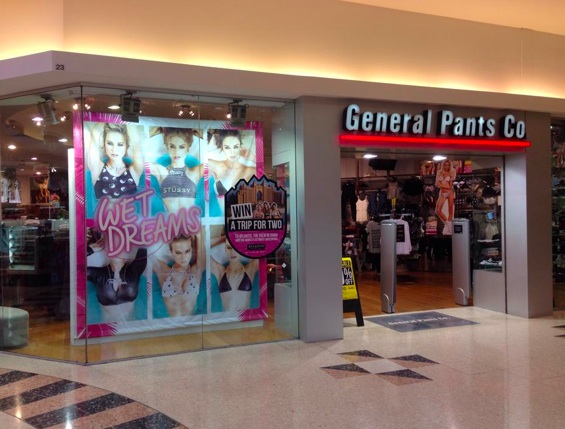 The youth clothing retailer has used images of naked women for an ad campaign called "Sex" and required staff - including underage staff - to wear "I love sex" badges.

The store has plastered the inside of its change rooms with images of prostitution and pornography.

See articles below for more info on General Pants history of sexploitation.

Corporate Sexploitation Offenders of 2019 Give these sexist companies a miss this Christmas!

General Pants has a long history of using sexist and sexually objectifying advertising to sell its merchandise. Their latest ad campaign, in store windows across...

It’s that time of year again. Every year in the lead up to Christmas, we release our annual blacklist of corporate offenders who have objectified...

It's that time of year again, already! As Christmas approaches, retailers are kicking it up a notch competing for your business, and Collective Shout releases...

A number of supporters have contacted us about General Pants 'Wet Dreams' ad campaign spotted in shop front windows of various stores around the country. ...