Posted by Eugene Ford 68sc on

The recent decision of White Ribbon to distance themselves from retailer General Pants could be viewed as a watershed moment for the clothing giant, after many years of contradicting themselves and their ‘empowerment’ of women through vulgar, sexualised and offensive advertising.

General Pants first came to the attention of Collective Shout in May 2011, when it was reported that underage staff were being made to wear badges stating “I love sex” at the behest of clothing brand Ksubi. Alongside the badges, the promotion included wall-hangings and displays of topless women being stripped by an unseen male standing behind them, while they are standing submissively with their arms in the air. In some shop fronts, the posters were framed by large keyhole displays, adding the allusion that shoppers were unwittingly spying on the models as they walked past.

Despite the predatory nature of the advertisements and reports from staff that the badges were “embarrassing” and "uncomfortable", it was only after the threat of lost revenue, through a string of customer complaints, that General Pants decided to censor the posters. Creatively enough, the posters were censored with a large poster titled ‘censored’ that barely covered the models chest, adding a ‘wink’ and a ‘nudge’ to the complaint that the posters needed to be changed in the first place. 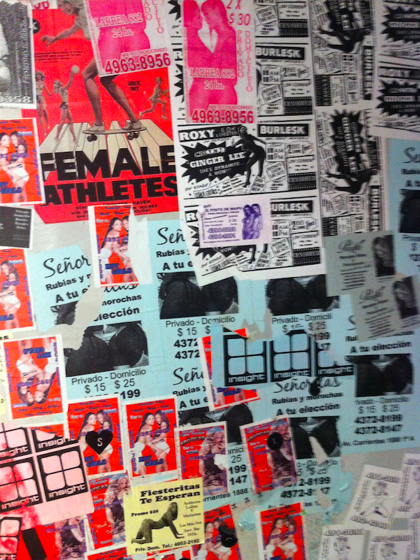 Yet it was only a little more than 6 months later that shoppers reported to Collective Shout that the change rooms of the retailer were ‘decorated’ with a collage style visuals of women advertising pornography and prostitution. Having this wallpaper on display is problematic for many reasons…no one can predict the age (both literally and emotionally) of the children viewing the wall-paper, no one can predict their ability to take what they see as the literal truth of how women should be treated (either prostitutes or porn-stars), and the often-traumatic circumstances of what leads women and men into pornography and prostitution is being overlooked and trivialised. Collective Shout’s complaints were overlooked, leading General Pants to make it onto the annual ‘Cross-em off your Christmas List’ for 2011, 2012 and 2013.

In 2014, General Pants attracted controversy once again for its ‘Wet Dreams’ campaign. In this instance, a sign in pink, neon lighting stating ‘Wet Dreams’ were hung in the shop windows, in front of a photo montage of a young woman laying in a bath, often wearing just a bikini or a sultry gaze. Exploitative in regards to its use of female sexuality and its appeals to the ‘male gaze’ the campaign pushed the envelope with the submissive, belligerent expressions on the woman’s face, giving connotations of a young woman looking helplessly up at us while we gaze, with our power and authority attached, down at the helpless victim. 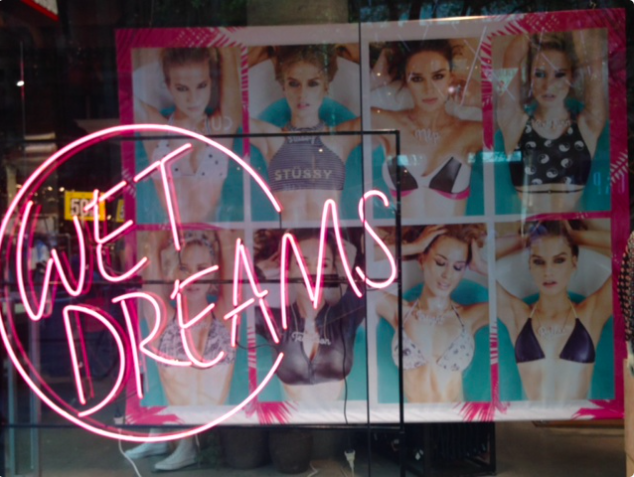 The addition of ‘Wet Dreams’ adds more salt to the wound, trivialising a normal stage of puberty for young men, while insinuating that when a wet dream occurs it may be at the expense of a woman’s dignity, self worth and self-preservation. Complaints about the ‘Wet Dreams’ campaign were dismissed by the Advertising Standards Board as being within what is appropriate for an advertising campaign. In their ruling, the ASB stated that “the women (were) not inappropriately exposed (nor) posed in a manner that is sexualised” before saying that although “the term “wet dream” is a colloquial reference to an erotic dream that results in an involuntary ejaculation of semen” they are forced to concede that “the term “wet dreams” is linked primarily to the competition to win an overseas trip to Dubai” (no, just no). Needless to say, General Pants made it onto the ‘Cross-em off your Christmas List’ again, for 2014 and 2015.

Yet it was in 2015 that General Pants made the decision to partner with White Ribbon in their commitment to raise awareness of violence against women, a move that was reflective of a growing trend to tackle violence against women on a superficial level, with little degree of self-reflection. According to a statement issued on the website, General Pants felt that “as the leading youth retailer (they) could play a large part in helping White Ribbon get their message out there to an audience that is generally hard to tap into”. In making this decision however, General Pants appeared to overlook the many ways they had been complicit in reinforcing beliefs that underpinned men’s use of violence in the first place, that women are second class citizens, with no thoughts, opinions or resolve to make complaints if they are being mistreated. The “Fit In” campaign of 2016 reinforced the notion that General Pants do not understand that actions speak louder than words; in this instance, the advertisement included topless and semi-naked women alongside fully clothed men, harking back to the fashion industries dogged resolve that ‘sex sells’ in advertising (even when it has been proved that it does not). 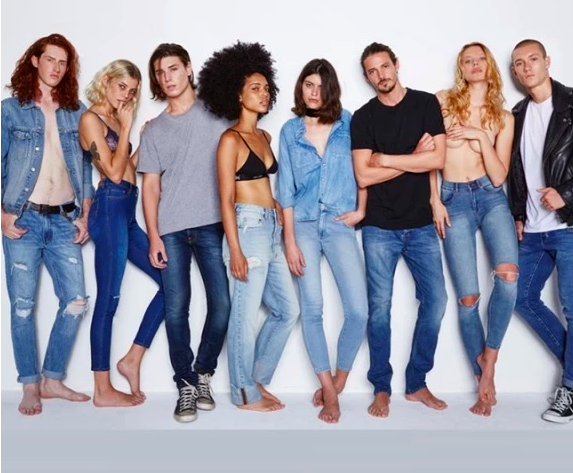 The multiple complaints against General Pants did not go unheeded. On the 6th October 2016, Collective Shout received word that from White Ribbon’s Liam Dooley that General Pant’s had been formally removed as a White Ribbon partner, with all references to General Pants removed from their website. Collective Shout are optimistic that with this decision, General Pants will learn a critical lesson that is overlooked when tackling abuse against women; that at a basic level, violence is the manipulation of power and control that results in one person being considered ‘less than’ another. With this in mind, exploitative advertising is more insidious than General Pants (and many others) are willing to recognise, as its prevalence contributes to a growing discord in which boundary violations are considered normal…as normal as the notion that ‘sex sells” in the first place.